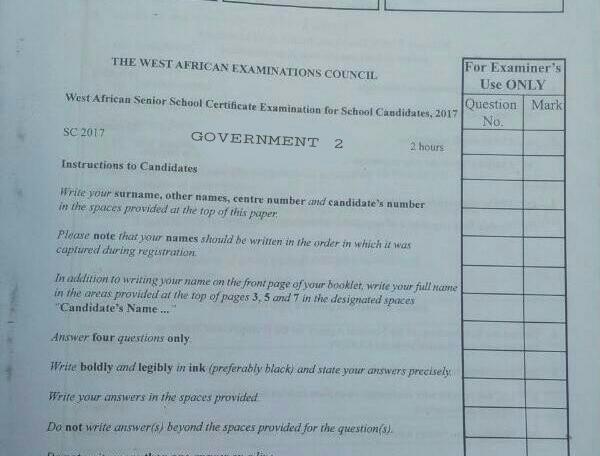 
1a)Legitimate government is the givernment  in which democracy provides properly planned institutions, practices for its functioning such as free and fair

elections, and transparency in decision making.


2a)  Rights can be defined as those inalienable (natural) rights and privileges enjoyed by the citizens of a given state, which are usually stated in the constitution of the country
Government Section B


7a. What is crown colony?
7b. Highlight 4 functions of Secretary of state for the colony under the British colonial system.


8. Highlight 5 contributions of Herbert Marculay to the political development of Nigeria.


10. Outline 5 contributions of Nigeria towards the growth of Economic Community of West Africa States (ECOWAS)
1a)Legitimate government is the givernment  in which democracy provides properly planned institutions, practices for its fuctioning such as free and fair elections, and tranparency in decision making.


2a)  Rights can be defined as those inalienable (natural) rights and privileges enjoyed by the citizens of a given state, which are usually stated in the constitution of the country


4a)
simple Majority system is a system of voting requirement of more than
half of all ballots cast
4b)
i)Representatives can get elected with small amounts of public support, as the size of the winning margin is irrelevant:
ii)It encourages tactical voting, as voters often vote not for the candidate they most prefer, but against the candidate they most dislike.
iii)It is regarded as wasteful, as votes cast in a constituency for losing candidates, or for the winning candidate above the level they need to win that seat, count for nothing.
iv)It can severely restrict voter choice. Parties are not homogenous and do not speak with one unified voice. Parties are more coalitions of many different viewpoints.


(5)
i)provision of capital.
ii)employment of qualified personnel
iii)improved conditions of service
iv)political autonomy
v)probity and accountability
9a)
foreign policy Plan of action adopted by one nation in regards to its diplomatic dealings with other countries. Foreign policies are established as a systematic way to deal with issues that may arise with other countries.
9b)
i)Size.
In the first place the size of a state’s territory as well as it’s population greatly influences its foreign policy.
ii)Geography.
The geography of a country, including its fertility, climate, location in relation to their land masses, and water-ways etc. also influence the country’s foreign policy.
iii)Culture and History.
The cultural and historical traditions of a country also deeply influence the foreign policy.
iv)Economic Development.
The stage of economic development which a country has attained also has its impact on its foreign policy.
10i)
Nigeria  played a central role in ecowas efforts to end the civil war in liberia
10ii)
nigeria has taken lead in articulating the veiws of developing nations on the need for modification of the existing international economic order
10iii)
nigeria contributed bulk of ECOWAS peacekeeping forces
10iv)
nigeria also founded regional cooperative efforts in west africa functioning as a standard bearor for ECOMOG and ECOWAS economic and military
10v)
nigeria played a role financially to the smooth organization of ECOWAS
Answers Loading……. . Keep reloading page
JOIN VISTANAIJ WHATSAPP GROUP VIA HERE