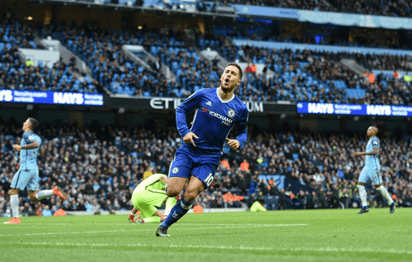 EDEN HAZARD has agreed a deal to make a sensational switch to flogged to Manchester United  to create funds for the mega-money move with Roman Abramovich demanding at least £85million.

But that fee could be cut as the Spanish giants are planning to let  Alvaro Morata go in the opposite direction as part of the deal.

Hazard – who is up for the PFA Player of the Year award  – even  hinted that he has ambitions to play for another club.

He said: “When it’s not PSG, it’s  Real Madrid, then maybe it’s Bayern Munich… strangely last year there wasn’t anybody.

“I may also have personal ambitions to play in other clubs.