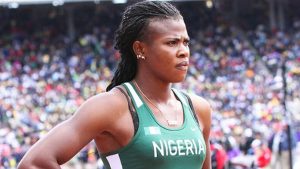 Nigeria’s queen of the track, Blessing Okagbare on Friday lost in her second outing of the season at the women’s 200m event of the IAAF Diamond League in Doha.

She competed at the Texas Tech Red Raider Shoot-Out last week where she won the 200m with a time of 22.87secs.

But the Nigeria speedster could not replicate her form in the first Diamond League meeting on Friday as she finished sixth in 23.15secs.