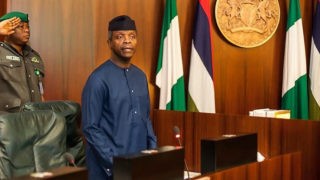 – Some Nigerians are of the opinion that the only thing worth celebrating today is the country’s unity
– Others believe that the only thing this government has got going is a strong media and PR team that has succeeded in confusing than informing everyone
– Someone said the best democracy gift Buhari can give Nigerians is to resign
As Nigeria marks Democracy Day today, May 29, some are lamenting that there is nothing to celebrate as cost of living is getting worse.
This day also marks the second anniversary of President Muhammadu Buhari’s administration which means he has only two years remaining to fulfill the promises he made to Nigerians.
RBefore the All Progressives Congress (APC) was voted into power in 2015, it made a lot of promises to Nigerians.
Two years down the line, the people are yet to see a number of the promises made.
Today, the jury has come out to score the Buhari-led APC government on how well it has performed. Some are of the opinion that Buhari’s aides have succeeded in confusing than informing everyone. Others are saying they did not vote for a bed-ridden/incapacitated president.
NAIJ.com has gathered some of the reactions of Nigerians as the country celebrates Democracy Day.
Some others have commended the APC government and they still have hope that things will get better.
PAY ATTENTION: Get more videos on Naij.com TV
In a powerful message to Nigeriansat the 2017 Democracy Day Interdenominational Church Service held at the National Christian Centre inAbuja on Sunday, May 28, Acting President Yemi Osinbajo urged Nigerians to be ready to make sacrifices as that would put the country on course to be great.
Meanwhile, the Ahmed Makarfi faction of thePeoples Democratic Party (PDP) has released the scorecard of the President Muhammadu Buhari-led administration as it marks two years in office.
In a statement captioned ‘The APC @ 2: Just Crass Governance…Nothing To Celebrate – PDP’ and signed by the national publicity secretary, Prince Dayo Adeyeye, the party said the All Progressive Congress (APC) has failed.
Source – onlinenigeria.com