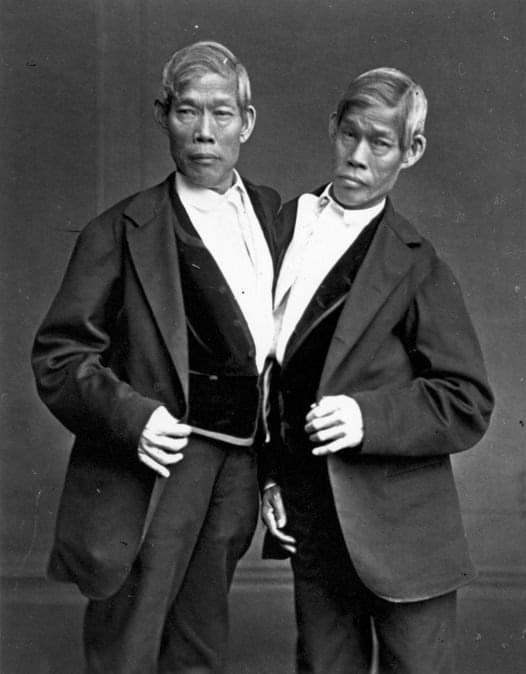 Chang and Eng, were Siamese-American conjoined twins.
Their fame propelled the expression ” Siamese Twins” to become synonymous for conjoined twins in general.
They were widely exhibited as curiosities, and were “two of the nineteenth century’s most studied human beings”

Chang and Eng, joined at the waist by a tubular band of tissue about 3.25 inches long and about 1.5 inches in diameter, were born of a half-Chinese mother and a Chinese father.
Their mother reportedly said their birth was no more difficult than that of their other several siblings’.
Their father, Ti-eye, was a fisherman, who died when the twins were young, possibly in a smallpox epidemic that ran through the area in 1819.
Their exact details of their early lives are unclear.

Chang and Eng were 17 years old, when they traveled to the United States.
They arrived in Boston on August 16, 1829.
They were soon inspected by many physicians.
Their arrival was excitedly reported in newspapers with varying degrees of racial stereotypes and falsehoods.

After leaving the United States, they toured major cities in Britain, and by the time they returned to New York in March 1831, the twins had gained some skill in English reading, writing, and speaking.
When touring in cities, the twins stayed at hotels, where they charged audiences to attend their “freak show”.
In small towns, their manager would send flyers ahead of their arrival, and they would remain at a lodge or inn for just one or two nights.

The twins performed physical feats, running and doing somersaults.
An emphasis was placed on their exoticness: they wore pigtails and dressed in “Oriental” clothing.
Their performances occasionally featured swimming, playing checkers, and doing parlor tricks.

In 1843, Chang and Eng married, sisters Adelaide and Sarah Yates, daughters of a respected local landowner.
While the girls had a “fair share of suitors,” the brothers had gotten to know them over several years, often visiting upon their return from business travels, and befriending the entire family.
The two couples — and they were unquestionably, two distinct couples, lived in separate homes, with the brothers alternating half weeks with each of their Wives.

While no details survived about how the couples conducted their intimacy, it’s worth noting that the brothers’ first children were born six days apart, and a later pair eight days.
They would go on to have an astounding 21 children, between them.

In early October 1860 they signed with famed showman P.T Barnum for a month and exhibited in Barnum’s American Museum in New York City.
They performed for several distinguished guests, including The Prince of Wales.

By the time the Civil War ended in 1865, the twins’ finances had taken a hit, so they decided to resume touring.
Chang and Eng made a trip to Britain in 1868–69, seeing physicians and chatting in exhibitions; their last visit there had been over 30 years before.
Chang’s daughter Nannie, who had never before been far from home, and Eng’s daughter Kate, both in their 20s, also came on the trip.

In 1870, Chang suffered a stroke that paralyzed his right side, the side that was closest to his brother.
Eng nursed him back to relative health, as Chang tied up his right leg in a sling and, using both a crutch and his brother’s arm, went about his daily routine.
But he never returned to full health, developed a vicious cough, and took to drinking.

Early in the morning of January 17th 1874, one of Eng’s sons checked on the sleeping twins.
“Uncle Chang is dead,”
The boy reportedly said to Eng, who responded,
“Then I am going too!”
Over the next hour, he suffered intense pain and distress, a cold sweat covering his body.
The only notice he took of his dead twin, was to move his body nearer to him.
Two-and-a-half hours after losing his brother, Eng Bunker died, they were 62 years old.