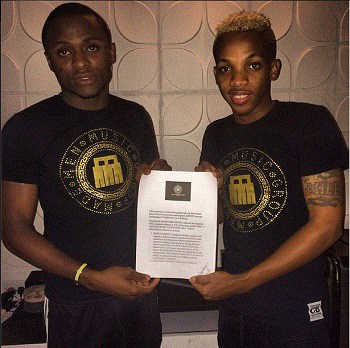 Triple MG boss, Ubi Frankin, has revealed that singer, Tekno, was suffering from a sickness that is not as serious as many thought it was. The singer got his fans a bit worried last Wednesday when he said that he was flying to the United States to get treatment for a sickness called ‘acid reflux’.
Tekno revealed that for about a month, he has been battling with acid reflux which is a conditon where burning pain, known as heartburn, is felt internally around the lower chest area. It is caused by stomach acid flowing back up into the food pipe.
This comes on the back of his energetic performance few days earlier at AY Live
He posted, “ I know I have disappointed a whole lot of promoters and my amazing fans worldwide. I have been sick for over a month from acid reflux and it has worsened. I want to sincerely apologise for any inconvenience this may cause; all the show refunds and any other loss. I’m not taking any booking right now as I am off to America for proper treatment. By God’s grace I’ll get better in no time and be back on stage! If you could say a little prayer for me, I would be grateful. Good health to you and yours. ”
Ubi has however clarified that the condition wasn’t as serious as it sounds, adding that Tekno should be back in two weeks at the maximum.
“ He has a medical condition that he had to travel abroad to treat so that the issue does not deteriorate. Although he was at AY live and he performed, I literally had to wear his clothes for him before he could perform. His illness is not life threatening but he had to travel abroad to ensure that he is thoroughly checked and properly catered for. He would not be away from the scene for too long and I am sure he should be back in two weeks,” he told Punch.