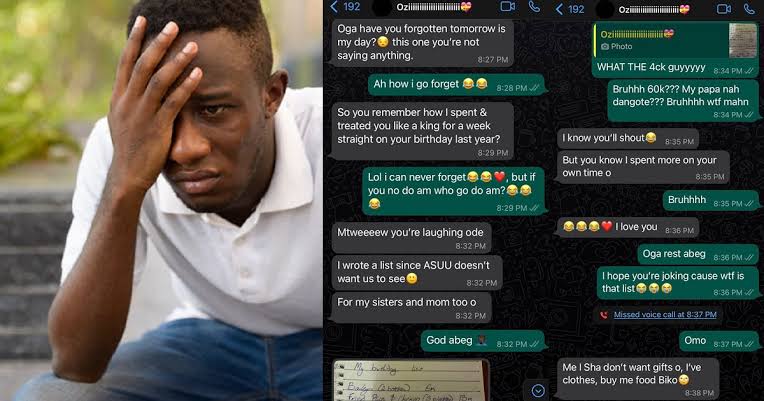 A young man has taken to Twitter to lament bitterly after his girlfriend sent him a comprehensive list of things she wants for her birthday.

@LifeOfNapaul shared screenshots of the conversation he had with the love of his life a day to her birthday where she reminded him of how she spent heavily on him on his birthday the previous year.

Before making her request, the lady recounted how she spoilt him silly for a whole week on his previous birthday and stated that on that grounds, she has written down a list of things she wants him to buy for her on her special day.

According to her, since they can’t spend the day together because of the ongoing ASUU strike, the least he can do is get her what she wants.

Then she sent the birthday wishlist which comprised of majorly food and drinks, and a small amount to get her hair and nails done. She also included a special treat for her parents and it all amounted to N60,000.

Upon seeing the list, the man was shocked and complained about not being buoyant enough to afford the said amount.

SEE ALSO:  Hilarious,- Lady shares pictures of what she ordered vs what she got, rant bitterly on twitter(photos)