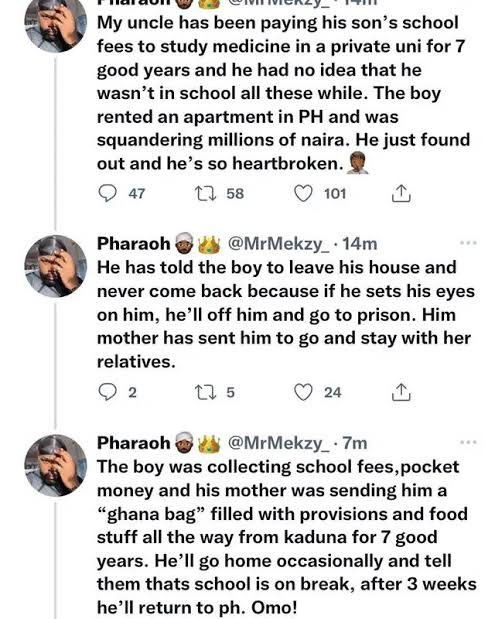 A struggling father has been left devastated after finding out that his son, whom he had been sponsoring in medical school for 7 years, was never enrolled.

A Twitter user, @MrMekzy_, who shared the story on the micro-blogging platform, said that his uncle’s son had been siphoning money from the family while pretending to be enrolled in medical school.

He said that the boy successfully carried on this lie for seven years, receiving support from his father in the form of school supplies, food, and money for maintenance, until it was recently revealed that he had never been enrolled in school.

According to Mr. Mekzy, the devastated father has told his son to leave the house immediately, never to return.

“My uncle has been paying his son’s school fees to study medicine in a private uni for 7 good years and he had no idea that he wasn’t in school all these while. The boy rented an apartment in PH and was squandering millions of naira. He just found out and he’s so heartbroken.

The boy was collecting school fees, pocket money and his mother was sending him a “ghana bag” filled with provisions and food stuff all the way from kaduna for 7 good years. He’ll go home occasionally and tell them thats school is on break, after 3 weeks he’ll return to ph. Omo!

He has told the boy to leave his house and never come back because if he sets his eyes on him, he’ll off him and go to prison. Him mother has sent him to go and stay with her relatives.”