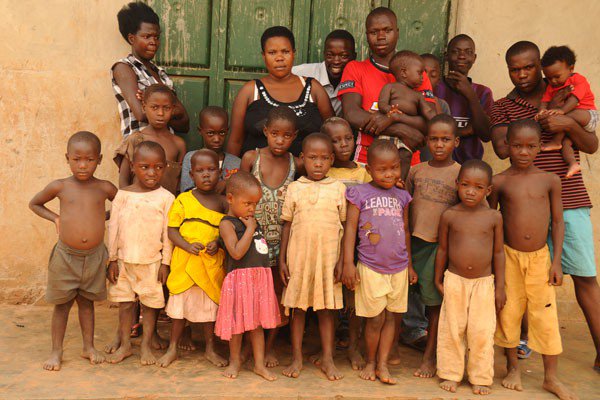 A Video of Uganda woman has gone viral as she breaks record of the worlds fertile woman.

Without undergoing any special medical procedure, a woman dubbed Mama Uganda delivered a total of 44 children from one man. The woman who hails from Uganda started childbearing at the young age of 13 after she was married off by her parents at age 12.

Her husband took off with all their money In a video shared by Explorer Joe Hattab on Facebook, the 40-year-old woman stated that she is a single mum after her husband abandoned them while disappearing with all the money they had.

The single mum has now been left to cater for the 38 children all alone – 6 of them are dead. A kind-hearted Arabian man provided the bunk beds that her kids sleep on but Mama Uganda has been able to enrol all her children in school. She delivered a single child only once.

Beaming with a smile from ear to ear, the strong woman revealed that doctors told her she is very fertile and that has contributed to her large childbearing. Interestingly, she only delivered a single child once, all others have been twins, triplets and quadruplets. Mama Uganda birthed 22 boys and 16 girls who are still alive. Her total 44 deliveries have been twins 4 times, triplets 5 times and quadruplets 5 times in addition to the single delivery. It is reported that no family planning method worked for her.