by VN Official
in General, Gist
0
0
SHARES
Share on FacebookShare on TwitterShare on WhatsappShare on Telegram 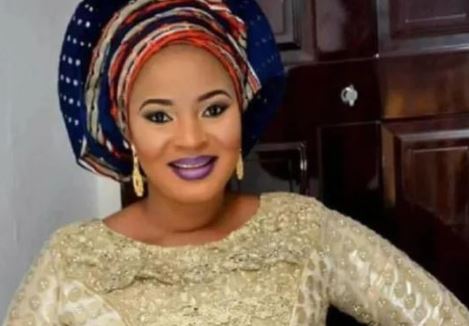 Ebony Vaults in Ikoyi was filled with people from all works of life, today, June 7, 2017, as colleagues, friends and family of the late actress, Moji Olaiya gathered in her honour.

Her body had arrived Muritala Mohammed airport in Lagos from Canada on Tuesday and has now been buried at the Ikoyi cemetery according to Islamic rites.

Six men dressed in black kaftan carried her remains which was wrapped in a white cloth and placed in a wooden see-through box.

Six men in black kaftan carried her remains into the cemetery

Her body was met by mourners who filled the hall to capacity and wailed as they saw her coffin arrive.

SEE ALSO:  2017/18 JAMB CUT OFF MARKS FOR ALL UNIVESITIES IN NIGERIA

The mourners present exclaimed Inna lillahi wa inna ilayhi raji’un (We belong to Allah and to Him we shall return) as her body was brought in amidst tears.

She had died in Canada two months after giving birth to her second daughter there Mourners struggled just to get a glimpse of the late actress, whom many described as humble.

Please Help Me! Wizkid Cries Out On Social Media as Davido Hypeman Replies Him After Trying to…. | Pics

“Most Women Lack Good Character And Patience, That Is Why Your Relationships Keep Crashing” – Lady Advices Beautiful Women (Watch Video)

Please Help Me! Wizkid Cries Out On Social Media as Davido Hypeman Replies Him After Trying to…. | Pics