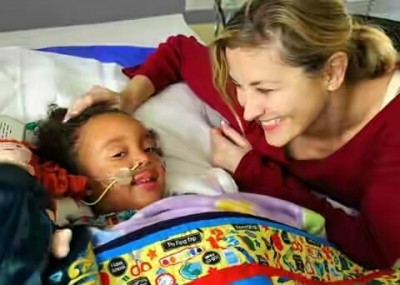 Beth Battista, is a teacher at Kids Express Learning Center in Madison. She had heard of the plight of Lyla Carreyn, who has been on dialysis for 12 hours a day after being diagnosed in 2016 with microscopic polyangiitis (MPA), a rare autoimmune disorder.

Battista, 36, decided to get herself tested to see if she was a match. When doctors confirmed she indeed had the matching antibodies for Lyla, she decided to surprise Lyla’s mother, Dena Carreyn, with the news that she would be donating her kidney to her daughter.
Reports gathered showed that the transplant was successful and Preschool teacher Beth Battista and her student Lyla Carreyn, 5, are both recovering at a Madison hospital after a successful kidney transplant.
Source – Bagitds