Nollywood actress , Wumi Toriola, has seemingly questioned God over her state after her colleague, Laide Bakare  show off her mansion  and luxury cars. 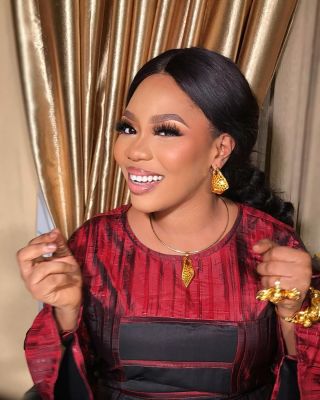 During the Eid Mubarak festivities recently, Laide Bakare had taken to her official IG page to flaunt the luxury cars she acquired not really up to a month after she showed off the multimillion Naira mansion she acquired as well.

Flaunting the exotic whips on her Instagram, Laide Bakare stated that she bought the rides just so she could reward herself for years of being hardworking.

She wrote as caption to her photos,

“There comes a time in every girls life when she decides to pamper herself extravagantly to compensate for years of hardwork and labor, having saved for years to acquire more luxurious houses and vehicles, it is save for me to say that persistence is the basic key to glorious success. Little by little then here I’m today. Just few weeks after my new house opening..I give you all the praise ya Allah NB: pls note, this is not a show off, but to further encourage ladies out there that it’s achievable, you can be successful on your own without depending on anybody in life. Huge congratulations to me. Alhaja Shakirat Olaide Bakare everything na double double. I deliberately choose these two colors, to match my new house painting”.

In reaction to Laide’s post, Wumi Toriola took to the comment section to write, “God, am i not hardworking?”