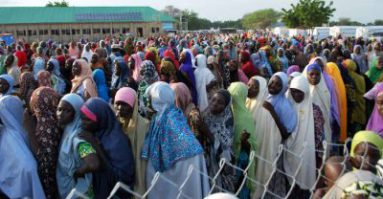 The Nigeria Customs Service (NCS) has donated 300 bags of 50kg rice to the Internally Displaced Persons (IDPs) in Praxis Catholic e-School in Gwarimpa, FCT, to enhance their standard of living.
The donation was made by the Comptroller-General of Customs (CGC), retired Col. Hameed Ali, who was represented by Mr Joseph Attah, custom’s spokesman.
Ali said the donation was in furtherance of the Presidential directives that all perishable items such as rice, vegetables oil, soap and others seized by NCS should be distributed to IDPs.

“Before now we have gone to Borno, Yobe, Adamawa and Benin, a Christian home for the needy, whose inmates were drawn from Gwoza in Borno.
“We visited these places in three phases and now we are preparing to start the fourth phase.
“Praxis school had visited the CGC to solicit support for the 300 IDPs in the school drawn from Gwoza in Borno, Adamawa and Yobe,’’ he said.
The proprietor, Mr Ben Onwudinjo, said though his school was not a camp, but needed support because the IDPs in the school were drawn from North-East.
The CGC said that Onwudinjo’s request was approved to alleviate the plights of the students in the school.
“In giving this rice, we are not saying it can completely turn the fortune of these children but it is just a way of demonstrating that wherever victims of insurgency are Federal Government will support them.
“The giving of these perishable items to these IDPs speaks volumes of the mind of Mr President, a president who believe that relief items should not be wasted.”
He urged the school “to keep doing what you know how to do best and that is touching the lives of fellow Nigerians in need’’.
Responding, Onwudinjo commended the CGC and the federal government for its support.
He said that the IDPs were from Gwoza in Borno, Yobe and Adamawa, adding that the school is catering for 300 IDPs and had even offered them scholarships.
Onwudinjo said the IDPs were selected from 39 camps in Abuja, adding that the school interviewed these IDPs and did matriculation for them on Dec. 9, 2016.
According to him, many of these children are still calling on the school to come for them but we don’t have enough space and resources to take care of them.
“On Friday, May 12, when we visited the CGC; we told him how the school has ran out of food for the student and because of that we asked them to return to the camps.
“The CGC has come to our rescue before evening they will return because we have food now.
“It is not easy to feed these IDPs because they are many and our resources have run out.
“We are grateful to the CGC and the federal government for this singular gesture of touching the lives of those who have been unfairly treated by circumstances beyond their control,” Onwudinjo said.
The IDPs, he said, came into the school in August 2016, adding that they are given scholarship into JSS1 and SS1.
Praxis Catholic e-School Gwarimpa is a special school for IDPs and vulnerable children.
Culled from informationng