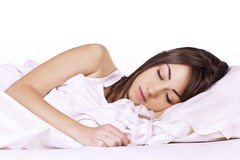 A new study has found that people who sleep in a cold room are healthier.  According to Dr. Chris Winter of Huffington Post, science states that temperatures between 15.5 and 19 degrees Celsius are ideal sleeping conditions. This would feel “cool” to those who already sleep in cold rooms but if you use a hot water bottle or pile on the blankets, expect it to take you a few weeks to adjust.

But don’t fret. Although it might take a period of adjustment, research shows that sleeping under cooler temperatures will pay dividends in a variety of different ways. Here are just a few to get you started.

You lessen your risk of metabolic disease.

By sleeping at cooler temperatures, your body will thank you. According to a study published in Diabetes, lowering your thermostat a few degrees before bed can help decrease your risk of certain metabolic diseases, such as diabetes.

In this study, researchers conducted an experiment comparing the blood sugar/insulin levels and caloric expenditures of test subjects sleeping at 75, and 66 degrees Fahrenheit, respectively.

After four months of testing, researchers concluded that those subjects sleeping in the 66-degree condition room experienced a number of metabolic advantages. After periods of sleeping in a colder environment, the amount of “brown fat” – or, good fat – of test subjects almost doubled.

Additionally, colder-sleepers also burned more calories throughout their day, as Gretchen Reynolds of the New York Times writes. In conjunction, these two relationships could lessen the risk of diabetes and other types of metabolic conditions, over time.

According to naturopathic doctor and bestselling author Natasha Turner, sleeping under conditions that are warmer than 70 degrees will inhibit your body from cooling down naturally, through sleep and the release of melatonin.

Melatonin is atop the body’s most crucial anti-aging hormones, and when it’s released at night – after exposure to total darkness – the body will react naturally, with a drop in temperature.

In direct response to this drop in temperature, the body will also pump out elevated levels of growth hormone – another critical anti-aging hormone. As greater amounts of these hormones are released into the body, you will look, and even feel, younger.

In addition to the health benefits provided by sleeping amidst a cooler climate, there are a number of practical advantages, too, such as actually getting to sleep faster. According to Kathleen Doheny of WebMD Magazine, when we go to sleep, the desired temperature of our bodies drops.

When your sleeping conditions are too hot, or too cold for that matter, your body will have an increasingly difficult time moderating your “internal thermostat,” so to speak. This might keep you awake and restless for a period of time, counting sheep, before you finally find yourself able to hit the proverbial hay.

If bodies cannot reach their desired goal of temperature regulation, it is likely that they also won’t reach deep sleep relative to that achieved in a cooler room.

Sleeping unclad will help cool you down.

By sleeping unclad, you’ll sleep cooler – and by sleeping cooler, your body will also produce less cortisol throughout the night. Cortisol, a naturally occurring hormone, is associated with stress and weight gain.

By keeping your cortisol levels down low, you’ll also find yourself moderating your appetite and anxiety, while you’re at it.

Sleeping unclad with someone can help, too… in other ways.

There are a slew of other health benefits that accompany the act of skinny-sleeping, specifically with another person. According to Sarah Thomas of the International Business Times, couples who sleep unclad together experience more contented relationships when compared to their more modest counterparts.

Oxytocin, which is associated with s*xual responsiveness, can also improve one’s individual health and psyche.

The presence of oxytocin in the body can help combat stress and other forms of depression, as well as lower one’s blood pressure. Bam, if that’s not enough reason to sleep unclad – I don’t know what is.