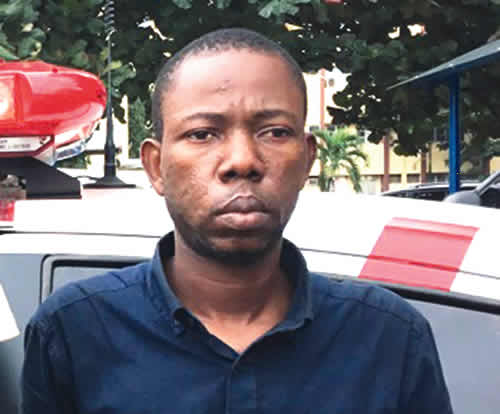 Operatives of the Rapid Response Squad of the Lagos State Police Command have arrested a hotel cleaner , Sylvester Ahuja , for allegedly defrauding a company of N 2 m .

The 30 – year – old was allegedly attempting to defraud the firm of another N 500 m when he was arrested in a hotel in Warri , Delta State.
According to the police , the suspect had in April 2017 hacked into the company ’ s email address , posing as its managing director.
He reportedly instructed the firm ’ s accountant to transfer N 2 m into his Access Bank account , which was done before the fraud was uncovered .
The police said Ahuja again used the same approach in June 2017 , requesting the payment of N 500 m into a Zenith Bank account .
The firm was said to have alerted the police , who swooped on the suspect in 911 Hotel , Warri .
“ The RRS team , in its investigations, discovered that the initial N 2 m was withdrawn with a debit card belonging to the suspect , Sylvester Ahuja , ” a source in the police said .
However , the suspect , in his statement to the RRS officers , denied the allegations, saying his friend , a member of the National Youth Service Corps , called Emmanuel , was the culprit.
He explained that he met Emmanuel at his workplace in April 2017.
He said , “Emmanuel served in Warri and he told me sometime in April 2017 that he was stranded and that somebody was going to send money to him . He requested that I allow him use my ATM card because he couldn ’ t locate his. I released it to him with my PIN . He said I should alert him whenever I received credit alert on my phone and I did .
“ I expected the transactions to have been completed after two days . After almost a week , I saw him and requested my ATM card ; he told me he was still using it . Afterwards, I asked him again and he told me that he had misplaced it . He didn’ t return the debit card again .
“ After my salary was paid , I approached my bank for cash . That was when I was told that my account had issues . It was at that time that I got to know that my account was used for a fraudulent transaction. Since the incident, I have not been able to trace Emmanuel . When I tried to find him , I was informed that he was out of Warri . ”
The Lagos State Police Public Relations Officer , ASP Olarinde Famous – Cole , said investigations were ongoing into the incident, adding that the suspect had been transferred to the State Criminal Investigation and Intelligence Department , Yaba , for further investigations.
This post appeared first on punchng.com