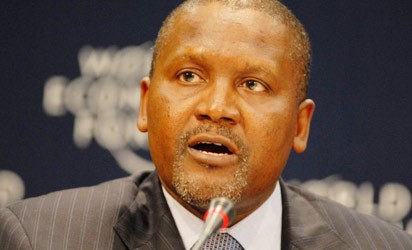 The managing director of Dangote Sugar Refinery Company, Engineer Abdullahi Sule disclosed this to newsmen in Minna, the Niger State capital after a brief meeting with the State governor, Alhaji Abubakar Sani Bello in his office.

Sule who led a team of experts from Dangote group to the meeting in Government House, Minna said the meeting was to brief the governor on the progress made so far on the proposed Sugar and Rice schemes to be sited in the state by the group.

According to Sule, sites for both the sugarcane plantation and the refinery have been identified while the Memorandum of Understanding (MOU) between Niger State government, the community hosting the schemes and the group is being perfected. “For the Sugar, we have identified the site and carried out feasibility study of the site; we have equally had the survey of the site, soil test of the site and done the demarcation of the land to enable us plant different crops.

“The group will be investing 450 million US Dollars on Sugar alone and this is explicitly stated in the MOU,” Sule disclosed.

On the proposal for Rice production, Sule said work was on progress adding that the group was prepared for the scheme as soon as due diligence and necessary formalities completed.

Meanwhile, Governor Abubakar Sani Bello has directed the Ministries of Agriculture, Lands and Justice to perfect the smooth take-off of the Sugar refinery project without any further delay.