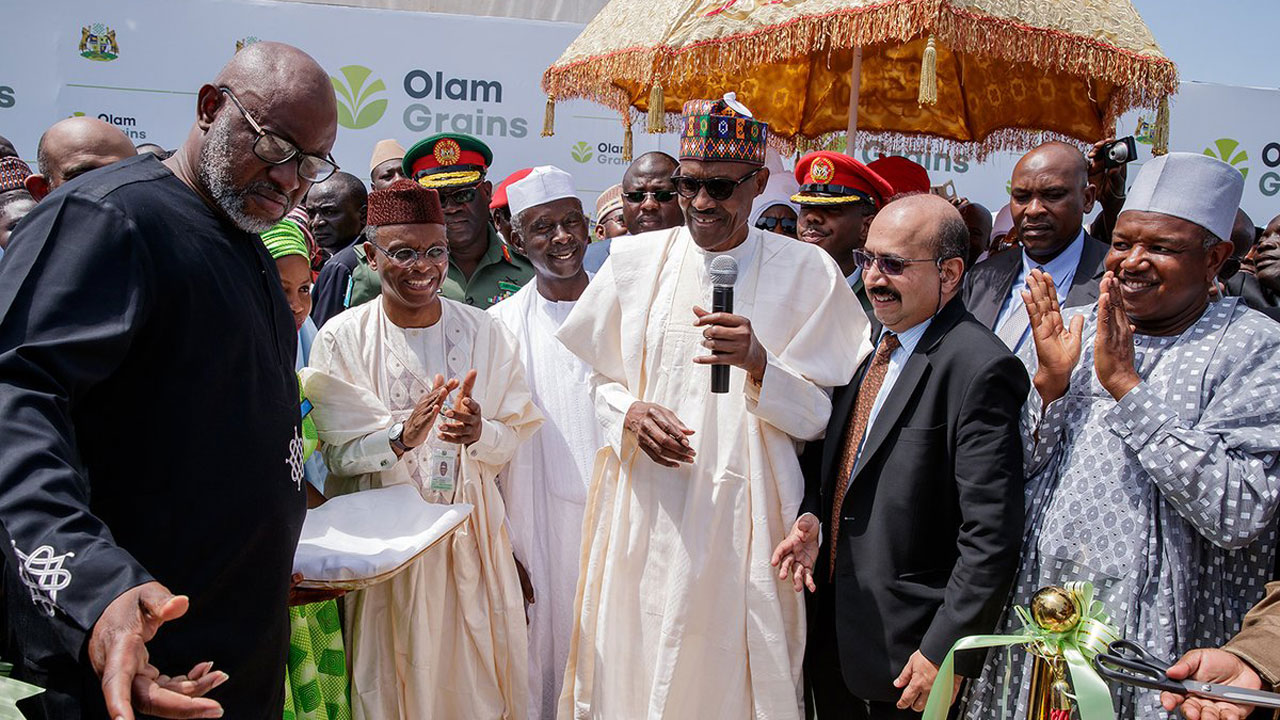 Located at Chikpiri Gabas village in Gwagwada area of the state, the President said the mill would not only add value to the diversification programme of his administration but will also assist in creating new jobs for the nation’s teaming youth.
President Buhari urged foreign and local investors to take advantage of the huge incentives, including favourable business environment being created by government.
Specifically, he urged them to invest in areas that would complement the employment generation initiative of the Federal Government.
His words: “This project is very important to us. We are determined to encourage those who are coming to invest in Nigeria to invest in areas where our people can get jobs, particularly in the non-extractive industry.”
He noted that it was because of the significance of the project to his administration’s policies of boosting agriculture that he rescheduled receiving the Ghanaian leader, Nana Akufo-Addo, to attend the event.
The President assured Olam group and other investors of government’s continued support and partnership. Kaduna State Governor, Mallam Nasir el-Rufai, thanked President Buhari for finding the time out of his busy schedule to commission the feed mill.
He noted that it was the first public outing by the President since his return from a medical vacation in London. Meanwhile, President Buhari would be leading Nigeria’s delegation to the 72nd United Nations General Assembly (UNGA) holding in New York.
Foreign Affairs Minister, Geoffrey Onyeama, who disclosed this yesterday, added that the conference scheduled for September 12 – 25 would afford Nigeria the opportunity to renew calls for international support for the release of remaining Chibok girls.
“We are always keen that Nigeria’s priorities and interests are really pushed and our objectives are achieved,” the Minister said. He said they would engage robustly with the international community.
Onyeama stated that the 2017 UNGA would provide a high level window of opportunity to advance Nigeria’s actions towards the promotion of peace and fervent implementation of Sustainable Development Goals (SDGs) .
He noted that Nigeria would pursue its agenda in line with the theme for the session, which is, Focusing on the People: Striving for Peace and Decent Life for all on a Sustainable Planet.
Onyeama added that Nigeria would seek the support of the international community in eradicating the residual traces of terrorism from the North East.
In another development, President Muhammadu Buhari and Vice President Yemi Osinbajo will lead other top government functionaries to participate in the October 1 grand finale of a 400 hours non-stop medley of musical activity to celebrate Nigeria’s 57th independence anniversary in Abuja.
Chaplain of the Aso Rock Chapel, Pastor Oluseye Malomo who gave the indication yesterday said the event is designed to celebrate the return of President Buhari after a 103 days medical follow-up in London, United Kingdom (UK), and mark the second year anniversary of the present administration.
He said, the Aso villa Chapel in conjunction with over 140 choir drawn from all Nigerian churches will tomorrow begin the activities lined up ahead of the grand finale.