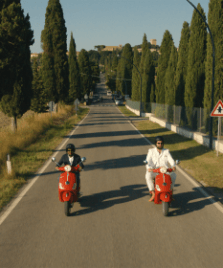 At some point after a breakup, someone is going to ask you, “So, what have you been up to lately?” The truth might be that you’ve been swiping your pain away on dating apps and trying to forget your ex ever existed.

That’s totally fine at first, but eventually you should probably do something.

In the Netflix show Master of None, newly single Dev goes on a sojourn to Italy to learn how to make pasta, which is one of his passions. His feelings for his ex might not have totally dissolved just by going on the trip, and at one point, he caves and starts texting her. But overall, the trip looks like a deliciously fun way to cope with a breakup. And experts say these kinds of distractions can be a good thing.
“It’s healthy that we all crumble after a breakup, but you have to have resilience,” says Lena Aburdene Derhally, MS, LPC, a licensed psychotherapist. After you’ve taken the proper wallowing time, it’s a good idea to get yourself back in the real world. Having hobbies sort of forces you to do that, she says. Some people say that distracting yourself from emotional grief can be unhealthy. But Derhally says that as long as you spend a little time processing your emotions, it’s okay. “It helps to have grounding things for yourself when you’re going through a breakup,” she says. “Making time for yourself on a regular basis always puts you in a good headspace.”
So, if you’re taking the proper steps to take care of your mental health, but you’re not sure what to do with your newfound freedom, here are some ideas.

Sign up for an entry-level language class, but preferably one that your ex can’t understand — jaja! You’ll probably meet a few interesting people, and all the time you spend studying will definitely take your mind off of things.

Going to therapy is a healthy activity at any stage, but particularly when you’re going through something tough, like a breakup. If you “never had time” to find a therapist before, now you do, and you might need it the most.

Improv comedy low-key teaches you the best dating skills, too. A lot of improv involves listening, reacting, and asking open-ended questions, which you totally have to do when you’re getting to know someone. Sign up for a class, even if you don’t feel ready to download any apps yet.

Make like Dev, and GTFO of the country — even if you’re just taking a bus to Canada. Take a trip with some friends or your mom and stay off of your phone if you can stand it.

They say that journaling can be a cathartic activity, but it can be difficult to start if you’ve never really been into keeping a diary. Treat the process like you’re writing the first draft of your memoir, and add all the dumb details about your ex that are pissing you off, plus all the happy stuff that’s happening to you now that the relationship is over.

If knitting or cross-stitching is your favorite way to cope with stress, make it your side hustle. This small entrepreneurial effort will remind you that you have awesome skills that have nothing to do with a relationship, and will help you justify spending hours knitting and watching Netflix.

Kim Kardashian recently said that she’s a fan of keeping an “ex box,” that holds all of her former partners’ belongings. You can do that, or you could just give it all away to someone who needs it. Studies suggest that when people give more, they also feel happier, which you could probably use right about now.

You might be craving some unconditional love right about now, and grandparents are so good at that. Grandparents have a way of making the monotonous parts of your life seem so wonderful, and they’ll appreciate hearing from you, too. If you don’t have grandparents, you could consider volunteering at a nursing home, which can be just as helpful in terms of gaining perspective and learning from people who’ve been there.
Source – informationng.com